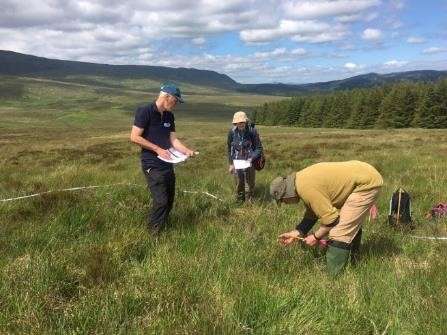 South West Scotland Environmental Information Centre (SWSEIC) is hosted by the Southern Uplands Partnership and serves both Ayrshire and Dumfries and Galloway. SWSEIC is based at Kirkgunzeon in Dumfries & Galloway and currently has 2 members of staff, Centre Manager Mark Pollitt and Project Officer Peter Norman.

A key element of the Centre’s work is supporting and encouraging local amateur wildlife recorders who gather the majority of information about the status and distribution of our local wildlife. SWSEIC runs regular training courses, covering identification of species such as dragonflies, amphibians and reptiles, and promotes and encourages involvement with national surveys and recording schemes as well as running an annual conference for local wildlife recorders. It has also developed a number of successful projects focussing on specific topics, including the “Wildlife at Home” recording project that engaged with over 80 people and gathered in excess of 4,300 biological records during 2020’s lockdown.

The initial development of the DGERC (Dumfries and Galloway Environmental Resources Centre, the former name of SWSEIC) in 2004 was funded by a number of sources, including Scottish Natural Heritage, Dumfries and Galloway Council, Landfill Tax Credits Scheme, Leader +, and the Scottish Environment Protection Agency. The Centre was originally hosted by Solway Heritage and moved to the Southern Uplands Partnership in 2011.

The ongoing development of the DGERC and its services has been funded through Service Level Agreements with Dumfries and Galloway Council and grants support from Scottish Natural Heritage. A range of projects have been undertaken in partnership with other local organisations. Previous project work has also been supported by grants from the Heritage Lottery Fund and the Scottish Government and the European Community, Dumfries & Galloway LEADER 2007 – 2013 Programme.

Environment Alliance for the South of Scotland (EASOS)

Working with local people, communities and businesses to make sustainable use of our natural and cultural heritage